The WCML was electrified in two stages. The southern section from London to Manchester & Liverpool was the first section to be wired and at the time it was decided that the overhead wire above each track should be independently supported. On double track sections the wires were cantilevered off masts either side of the running lines. On multiple track sections lattice gantries were used. A closer inspection of the gantries will reveal that there were in fact different types of gantry used depending on the job required. For supporting the wires on sections of plain track lightweight structures were used whilst above junctions a more middleweight design was employed. There was a third type of gantry this being the heavyweight style with the distinctive A frame supports either side. These were used to anchor the wires where needed and were commonly seen with tensioning weights hanging at the sides. They were also employed where a lot of weight had to be supported, for example at feeder stations or outside loco sheds where the top of the gantry would have to support extra insulators and switch gear.

By the time the second section was wired between Weaver junction and Glasgow electrification practice had changed with regards to supporting the wires over multiple tracks. Instead of the lattice gantries previously used lightweight head span wires were strung between large masts either side of the tracks. 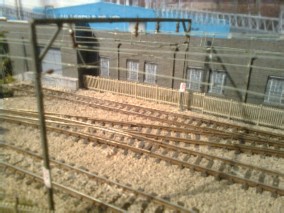 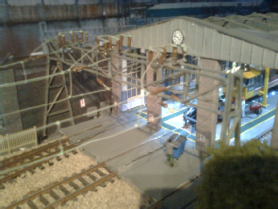 Simple lightweight support in a yard

Typical heavyweight gantry outside a loco shed. Note the A shape legs